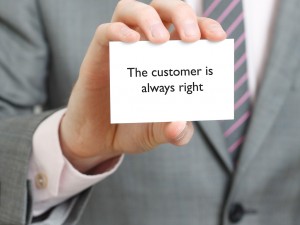 Memo to Lawyers: The Customer is Always Right

A century ago Harry Selfridge, the London retailer, declared: “The customer is always right.”  The temptation to interpret this too literally belies the wisdom of the remark, because with an economy of words, Selfridge captured the cornerstones of success in any service business: (1) convince the customer that s/he will receive good service; and (2) convince employees to provide a positive customer experience.  This was a departure from the “caveat emptor” standard of the time.

Naturally, customers are not always right, but whether one is selling shoes or legal services, it helps to instill customer/client confidence.  A critical element of customer trust is the client’s expectation the provider will be reasonable, transparent, and stand behind the service or product.  Lawyers were not long ago high up on the list of “most trusted” job categories.  But as law firms morphed from small, personalized groups to enormous, geographically disbursed businesses, that trust has eroded.  The popular and derisive tee shirt that reads “Trust Me, I’m A Lawyer” speaks volumes.

The UK provides a remarkable example of lost trust in lawyers and the steps taken to revive it.  Can it come as a surprise that this odyssey was piloted not by lawyers but by the consumers of legal services?

A Quick Legislative History of the Legal Services Act of 2007

Complaints against lawyers in the UK were so widespread in the early years of the new Millennium that Sir David Clementi, former Deputy Chairman of the Bank of England, was authorized by the Britsh Government to undertake an extensive examination of the legal profession.  Mr. Clementi is not an attorney, and that might be a cause, if not the proximate cause, of the candor of his assessment.  His two-year investigation revealed several glaring problems in the self-regulated legal vertical.  Sir David certainly understood business and the procurement of legal services; he was a Chairman of Prudential, plc, one of Britain’s largest insurance companies, as well as non-executive Director of the Rio Tinto Group, a huge minerals and mining company.  His no-holds barred evaluation of the legal profession concluded that: (1) a massive overhaul of the self-regulated legal industry was necessary; (2) inter-disciplinary practice should be sanctioned—meaning that lawyers be permitted to work with non-lawyers; (3) signifcant changes were necessary to restore public confidence in the profession; and (4) the interests of the consumer must be paramount in fashioning new regulations.

The Government adopted Clementi’s recommendations and took them even farther, authorizing the creation of “Alternative Business Structures” (ABS) enabling non-lawyers to invest, share profits, and manage law firms.  This is the best-known portion of the Clementi Report and its legislative aftermath but it is by no means its centerpiece.

The crux of the Legal Services Act of 2007 (the Act), the product of Clementi’s investigation and ensuing Parliamentary action, is an overhaul of the rules governing lawyers in England and Wales intended to serve the public interest and to restore confidence in lawyers.  And if you think this characterization is a matter of subjective interpretation, consider the title of the Government Report that led to enactment of the Legal Services Act: “The Future of Legal Services: Putting Consumers First.”   Then, read the Executive Summary’s introductory paragraphs:

“This White Paper sets out the Government’s proposals for reform of the regulatory framework for legal services in England and Wales. The purpose of the changes is to put the consumer first. The Government has set up a Consumer Panel to advise it as it takes forward reform.

The changes will mean an end to the current regulatory maze. The aim is a new regulatory framework, which better meets the needs of consumers and which is fully accountable.”

Meanwhile, On This Side of the Pond…

The Legal Services Act has been viewed with a mix of caution, dread, and visceral backlash by many lawyers on this side of the Atlantic.  The Act is often characterized as an existential threat to lawyers’ independence and a capitulation to the avaricious over-reaching of business types whose goal is to annex the lucrative legal vertical. But lost in this fear-of-change mongering is the stark parallel between the current US legal industry and the pre-Clementi (2004) British version.  Can one reasonably deny that here in the States—as was the case in the UK— there is a marked erosion of consumer confidence in lawyers, whether at the retail or corporate ends of the marketplace? What, then, has the response been in the US to restore consumer confidence in lawyers and to “put the consumer first”?

The ABA Commission on Ethics 20/20 was formed a few years ago to examine how globalization and technology are transforming the practice of law and how the regulation of lawyers should be updated in light of those developments.  Unlike the Clementi Report authored by a senior business executive and sophisticated consumer of legal services, the ABA inquiry is conducted by lawyers who might tend to filter things through their narrow lens.  While the consumer is certainly in the background, the focus appears to be on the way lawyers practice rather than the impact of that practice on consumers. Who is the “protected class” here? The Brits concluded that consumers of legal services should be paramount, not lawyers.  Why should it be any different here, especially given the global market legal services has become?  Perhaps if the examination of the US legal profession were to be undertaken by a “non-lawyer” legal consumer—like David Clementi—a different result might obtain.

Efforts to effect change have been spawned in other US quarters. Soon after the great economic crisis of 2008, the Association of Corporate Counsel (ACC), the in-house watchdog of the corporate legal segment, launched its “Value Challenge,” exhorting large law firms—all with nearly identical economic models—to provide clients with greater value. Value, of course, is one of the cornerstones of most businesses, but its application is new—and largely unwelcome–to lawyers.  So new, in fact, that considerable debate has ensued regarding what “value” means in the context of delivering legal services.  It is telling that lawyers, a group so adept—and well compensated—for parsing words would struggle with an appropriate meaning—much less adoption of  — “value”.  So too with “efficiency,” a word which still makes many lawyers bristle.  Why?  Because for many attorneys it is inimical to the purportedly bespoke services they provide.

The urban myth that all—or most—legal services are bespoke has been generally put to rest, but “efficiency”, “value”, and “transparency” are still viewed by many lawyers as a failure to appreciate the “unique” work they do. Perhaps attorney resistance to these business cornerstones is not so much a problem of diction but one resulting from the traditional law firm structure where the (short term) economic interests of lawyers and clients often conflict.

Which brings us back to “the customer is always right.”

Conclusion: It’s About the Client, Not the Lawyer

When I was a young trial lawyer, the managing partner had a Daumier print in his office that depicted a rotund English barrister clad in his wig and robes.  The barrister stood imperiously leaning on a lamppost while a young woman, bedraggled and with two young children in toe, sat weeping nearby on the curb.  The caption read: “You lost the case, Madam, but you had the pleasure of hearing me plead it.” Comically tragic as this is, it is right on the mark.

My friend Jeff Carr, former General Counsel of a Fortune 500 company, recently told me: “For many law firms & lawyers, ‘customer focus’ means focus on the customer as a source of revenue as opposed to focus on meeting the customer’s needs, objectives, and expectations.”

Its time for lawyers to take the initiative and focus on those customer “needs, objectives, and expectations.” If lawyers fail to take the initiative and to adopt a more client-centric approach—with or without regulatory mandate—their customers will find those who will.  Already, there are signs that this is happening as more and more work once described as “legal” is being handled by non-lawyers as well as by attorneys operating outside the traditional law firm environment.  Henry Selfridge’s observation should serve as an admonition for lawyers: “The customer is always right.”